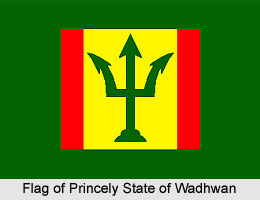 The state of Wadhwan was officially established in 1630. However, the actual history begins in 8th century when the Jhala Kings belonging to the Makwana Sect entered Kathiawar from Sind and set up their kingdom there. Although details are not available, we know that the founder of the dynasty was one Harpal Devji, who set up his capital at Patdi, near Little Rann of Kutch. Later in 15th century, the capital was shifted to Kuwa. Let us start our chronological discussion from there.

Chronology of Jhala kings since 1469

In 1469, Rana Waghoji succeeds the throne in Kuwa; but he is soon embroiled in a dispute with the Sultan of Gujarat.

In 1479, Rana Waghji dies fighting for his kingdom. Enemy forces destroy the capital and his sons flee for life.

In 1488, new capital is established at Halvad, 76 Km from present day Wadhwan.

In late 16th century AD, conflict among the heirs of the throne arises during the reign of Rana Rajdharji. The three sons of the actual heir apparent flee to save their life. While eldest dies, the younger Rajoji and Sartanji survive.

Chronology of Wadhwan rulers since 1630

1630:  Rajoji Prithraj Ji takes Wadhwan, then a fiefdom under Halvad. He establishes his capital there and takes the title of Thakore Sahib.

Chronology of Wadhwan since 1807

1807 is an important year for the State of Wadhwan. In this year, Wadhwan loses much of its independence and becomes a protectorate under the British.

22nd May, 1918: Although Jorawarsimhji Jashwantsimhji becomes the next king, because of his young age, his coronation is deferred until 16th January, 1920.

Chronology of Wadhwan since 1947

15th February, 1948: Thakore Sahib Surendrasimhji Jorawarsimhji signs a treaty of accession to the Indian Union and Wadhwan becomes a part of Kathiawar State of free India

1956: Kathiawar, renamed as Sourashtra State is amalgamated with Bombay Presidency.

1960: Bombay is bifurcated into Maharashtra and Gujarat. Wadhwan becomes a city under Surendranagar district in Gujarat State