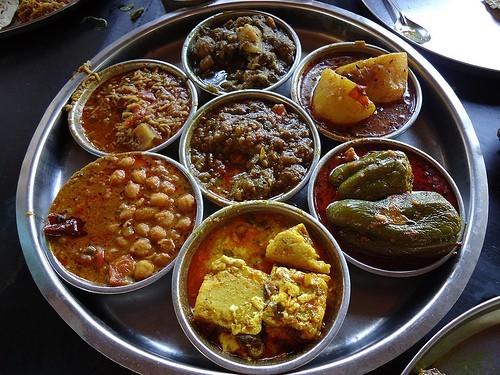 Since Wadhwan falls under the Kathiawar region, food here is mainly influenced by Kathiwadi style of cooking.  However, closer interaction with outside world has had its effect on the food habit of this region. Although by tradition, Kathiawari food is hot and spicy, we can witness some changes in that.

As we have already indicated, a typical Kathiawari dish is hot and spicy. The people here use lots of oil, ghee, salt, sugar (mostly jaggery), green chilies, garlic and ginger in their cooking. This kind of hot and spicy food provides them with the required energy. Chutneys made with raw papaya help them to digests such rich food. Chhaas, made from buttermilk, too aid in the process. The meals are generally accompanied by different types of sweets, mostly made with jiggery.

It has to be remembered that the land in Kathiwar region was always semi arid and the crops grown in this part of Gujarat mainly consisted of sugarcane, peanut and bajra.  Wheat, pulses and sesame are also grown to some extent. Among the fruits grown are papaya, ber, mango and chikku. We find extensive use of these items in the local cuisine.

A few common dishes in Wadhwan

However, with the introduction of faster transport and better agricultural technology, different types of vegetables are also being included in the menu. Sambhariyu shaak, Vatana nu oondhiya, vagarela marcha, turiya sambhariya, khichdi, kadi, bajra nu rotla, ringan nu olo, dal dhokadi, lasaniya bataki, kachori etc are some of the dishes much cherished by the people of this region. Phafda made with different kinds of flour is another popular dish. It is generally flavored with omum. Debras made from wheat flour and spinach is also another favorite dish. A dollop of yoghurt and a pinch of sugar and salt added to the dough make it even tastier. It is generally accompanied by sweet chutney called Chhondu. Patra curry made with colocacia leaves and stuffed gram flour is another delicacy.

Other influencing factors on food in Wadhwan

However, if you delve deeper, you will find that Kathiawari cuisine is essentially Gujarati food with a touch of Bohri and Parsee style of cooking. Moreover, close interaction with other parts of Gujarat had also left an impression on the food habit of this region. Many people now prefer the less spicy Gujarati style of cooking for daily intake.

In general, Hindus in Gujarat abstain from taking any kind of non vegetarian dishes. However, the Muslim community partake meat and other non vegetarian food items. In Wadhwan too, the majority of people are strict vegetarians.  However, just as in rest of India, people in Wadhwan also appreciate North and South Indian dishes. Chinese and Pizza joints in adjoining Surendranagar are also frequented by the residents of Wadhwan.


Eating out in Wadhwan

There are number of good restaurants as well as foodlets not only in Wadhwan, but also in the adjoining city Surendranagar. Following are three such places located within Wadhwan:

Sagar Samosa Center opposite Mepro Laboratory, G I D C, is a popular joint in this town. For specific information, you can call  them at 99747-57298.

Utsav Park near IBP Petrol pump, Kothariya Road is another good place to visit. People go there to sample their South Indian and Chinese dishes. You can call them at 02752-240-949 for more details.

On the other hand, if you are looking for delicious Gujarati dishes, you can go to Gopi Restaurant at 85, Adarsh Society. It is a multi cuisine restaurant and therefore, you can order other dishes as well. To book table you can call at 02752-237-147